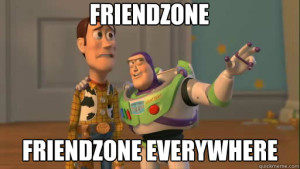 I spend a lot of time, well not a lot, but quite some time on 9GAG. And I see many posts about friendzone, crushes and other stuff like that. I knew a little bit about the  friendzone term and I was wondering myself What the fuck they see friendzone like that? Then I found out that for them “friendzone” is that zone that people like to call when then can’t get a girl, or a boy, and prefer to become friends with the hopes of a stupid romance movie character that eventually, if they stay around enough, they will become lovers and spend the rest of their lifes together.

Basically, you try to woo a someone, they don’t respond to your emotions, you decide to become their “friend” and after that you complain that you got put in the “friendzone”. And most of the people don’t even try to share the feelings or the emotions, they just become that “friend” with a crush.

Why do I keep putting friend in brackets? Because when you have a crush on someone, and your ultimate goal is to fuck that person( Don’t deny it!), you are not really a friend. Especially when you are a little bitch that goes on the internet and complains how they got in the friendzone and can’t go out of there.

Friendzone it’s a real thing. I’ve read in many books and about relationships and seduction about it. And the first advice you find in those books about the friendzone it’s to be careful not enter there. That’s right, you enter in the friendzone, you don’t get put there. It’s not like a girl will magically decide: I don’t see him as lover material, but as a friend he will be great. To the friendzone with you!

I won’t start giving seduction and dating advices now. That’s not the purpose of this article. What i’m trying to say it’s that becoming friends with the person you like it’s not a bad thing. But it’s a bad thing to complain about it. Especially when you have the power to stop the situation.

If you don’t like being friendly with your crush, then don’t be friendly. It’s that simple. Be a man and move on. There are out there 7 billions people on this planet, and growing. You will find someone, eventually. You don’t have to stuck to that one girl, because her hair shined in a certain way when the sun was rising up along with some other part of your anatomy.

The bottom line is like this. Man up, confess to your goddamn girl( or boy if you are a girl who reads this) you like, ask her out on a date, do something. There are two ways this can go down: she accepts  ( you win), she doesn’t accept because she only sees you as a friend ( you win again, because now you know for sure). If it’s the second part, it can be a little your fault( I will talk about this in another article…. maybe) because of your actions, but you can move on now. You can be a real friend for her and act like one, instead of waiting for the moment to get into her pants. And you can go find another person that will stir butterflies in your stomach.

Stop complaining about the friendzone, it’s a situation that you got yourself into, and only you can escape.

And really, do you really need to go online and complain about it?

What does being a man mean?

Why do we put in the work?

This site uses Akismet to reduce spam. Learn how your comment data is processed.